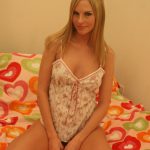 I “stumbled” onto your the Out 2 Meet website 2 1/2 years ago and with some encouragement from a few pals decided to post a quick profile of myself. Mind you, my self-esteem at that point of my life was at it’s lowest from a bitter breakup with an ex-boyfriend 7 months prior. My view of the opposite sex wasn’t the greatest, but I wasn’t going to give up all hope.

Of course, I doubted anyone would really want to get to know me through some vague facts, but what the heck right? So, 2 weeks later I got 5 responses! “Not bad,” I told myself. After glancing at the first four responses, which didn’t spark my interest, I was about to give up…until I read Joe’s email. It was simple and to the point, but there was just something about his email that caught my attention. So, naturally, I responded to him with an email of my own, and the rest is basically history.

Many of my friends, even the ones who suggested I try this website, were skeptical at first that I’d actually “met” someone through the internet. But I think I was the most surprised one of all for a while. Joe and I started out as friends first, and eventually we began forming feelings for each other, even though we hadn’t met yet! Feeling very strongly with someone whom you’ve laid eyes on was very new to both of us, but we both couldn’t stop these emotions from happening.

We met after 3 months of emailing, instant messenging, and phone calls. I’ll never forget the nervousness I felt that whole day until the second he stepped off the plane and we gave each other assuring hugs. And ever since that day I still get that “butterflies-in-my-stomach” feeling whenever we see each other